Origin: Originating from the Mediterranean, sage is a sub-shrub that was introduced in Eastern and Northern Europe in the Middle Ages and then in America in the 17th century. It is grown commercially in Albania, the former Yugoslavia, Turkey, Greece, Italy, France, England and America. It affects well-sunny sites and well-drained soils.

The majority of herb studies have been carried out in animals from extracts of the plant. The extract is used to be able to isolate and concentrate active ingredients, as well as to understand the mechanisms of action. In humans, it is difficult to assess the health effects of herbal consumption since the quantities consumed are generally low.

Antioxidants . Antioxidants are compounds that reduce the damage caused by free radicals in the body. The latter are very reactive molecules that would be involved in the onset of cardiovascular diseases, certain cancers and other diseases related to aging. Some researchers have evaluated the antioxidant capacity of herbs and all agree that fresh herbs demonstrate a significant antioxidant capacity, sometimes even higher than that of certain fruits and vegetables. This demonstrates that indeed, adding herbs regularly in the diet contributes to the intake of antioxidants. In one study, the antioxidant capacity of sage was estimated to be the highest among six fine herbs. Carnosic acid and rosmarinic acid  are the main antioxidant compounds found in sage .

A recent study in rodents demonstrated that the consumption of sage infusions dried for two weeks by these animals significantly increased the activity of an antioxidant enzyme produced by the liver. The infusion consisted of rosmarinic acid and luteolin , two phenolic compounds with antioxidant effects. The potentially beneficial effect on the liver, given to animals by the infusion of sage, deserves to be explored further in future studies.

Effects on blood lipids . The consumption of an extract of sage leaves would decrease triglycerides in animals. Recall that triglycerides are circulating lipids in the blood and that they can become a predisposing factor to cardiovascular disease when they are present in large quantities. The authors of this study identified several active compounds in sage, but only carnosic acid demonstrated a hypotriglyceridemic effect. A recent scientific study in humans has demonstrated beneficial effects of the consumption of sage capsules by lowering total and LDL cholesterol levels while increasing HDL cholesterol levels. Further studies remain to confirm these allegations.

Alzheimer's disease . An intervention study showed that sage extracts administered for four months to elderly patients with Alzheimer's disease improved cognitive function and decreased restlessness compared to those receiving placebo. Sage would be effective for the treatment of mild and moderate cases of the disease. The mechanisms proposed to explain these effects include improved transmission of nerve impulses in the brain as well as decreased oxidative stress and inflammatory reactions. In addition, sage would also be beneficial in healthy subjects in prevention, as it would improve cognitive performance11.

Effect on blood glucose . In an exploratory animal study, administration of a sage extract reduced blood glucose levels in mice of moderately diabetic and non-diabetic mice to 30%. In mice with severe diabetes, sage did not have a significant hypoglycaemic effect, thus demonstrating that sage extract requires the presence of insulin to exert downregulation of blood glucose. It is not possible, within the limits of this study, to identify the active compounds responsible for the observed effects and even less to transpose the results in humans. On the other hand, a recent study in humans has demonstrated a decrease in fasting glucose as well as hemoglobin glycated by the consumption of sage capsules.

Menopause . The heat associated with menopause affects the majority of women in peri-menopause. The consumption of sage extracts demonstrated positive effects on the frequency and severity of hot flashes in postmenopausal women. The mechanisms are not yet fully understood but the phytoestrogen content of sage would help to reduce the hormonal imbalance occurring at this time of a woman's life.

See the meaning of the classification symbols of nutrient sources

Vitamin K: Sage is an excellent source of vitamin K. This vitamin is necessary for the synthesis of proteins that participate in the coagulation of blood (both in stimulation and in inhibition of blood clotting). It also plays a role in bone formation. In addition to being in the diet, vitamin K is manufactured by the bacteria present in the intestine, hence the scarcity of vitamin deficiency.

Iron: Sage is an iron source for man , but not for woman. Each cell in the body contains iron. This mineral is essential for the transport of oxygen and the formation of red blood cells. It also plays a role in the manufacture of new cells, hormones and neurotransmitters

The optimum dosage is not established, as it has varied during the tests as well as the type of treatment (dried leaf capsules, leaf extract, essential oil). In one of these trials, capsules were provided providing 300 mg to 600 mg of dried sage per day

Warning. Continuous intake of internal sage essential oil should be done under supervision of a properly trained aromatherapist.

- Inflammation of gums, mucous membranes of the mouth, nose, pharynx and throat

Sage contains significant quantities of vitamin K. This vitamin is necessary for blood coagulation, it can be made by the body in addition to being found in certain foods. People taking anticoagulant medicines , for example those marketed under the brand names Coumadin®, Warfilone® and Sintrom®, must adopt a diet in which the vitamin K content is relatively stable from one day to the next. Herbs, including sage, contain vitamin K and should therefore be used as seasoning only . Persons on anticoagulant therapy are advised to consult a dietitian-nutritionist or a physician to learn about the dietary sources of vitamin K and to ensure the most stable daily intake.

The term "sage", which appeared in the thirteenth century, comes from the Latin salvia, derived from the verb salvere (healing), alluding to the alleged medicinal properties of the plant.
Sage is said to be one of the oldest cultivated herbs. His reputation for preserving health and prolonging life would be acquired from the earliest times, in both China and Europe. Formerly, it bore the name Salvia salvatrix , which speaks volumes about the powers that were attributed to it.
The sage sung
Why must man die,
Then in his garden at any time
He has sage planted?
Extract from a poem "pedagogique" written by an anonymous teacher of the Salerno School of Medicine, famous in the Middle Ages.
The genus Salvia comprises about 700 species, distributed in the Mediterranean basin, southern Europe, Asia Minor, Central and South America. The focus may be Syria, but we are not sure. According to species and country, sage is used in cooking as well as in traditional medicines and as herbs of purification. Thus, Amerindians use white sage as incense and divinatory sage , hallucinogenic properties, in various rituals.
Mexicans also consume, under the name of chia, the mucilaginous seeds of certain South American species, which together with amaranth and corn were once the "cereals" of the Aztecs. There are also varieties with a fruity flavor, such as pineapple sage , which are used in the preparation of desserts (ice creams, sherbets or fruit salad seasoning) or iced tea.
However, it is the officinal sage , which comes from the Mediterranean basin and from Asia Minor, which is used mainly in cooking, especially in southern Europe, Italy being by far the country where it is most popular. Introduced in North America in the 17th century, it was the most consumed herb until the end of the Second World War, when it gave way to oregano. Because of its richness in antioxidant substances, it is used to season sausages, including sausages, which increases shelf life. Its essence is also used in the manufacture of perfumes, soaps, toothpastes and cosmetics.

How to Choose Sage? 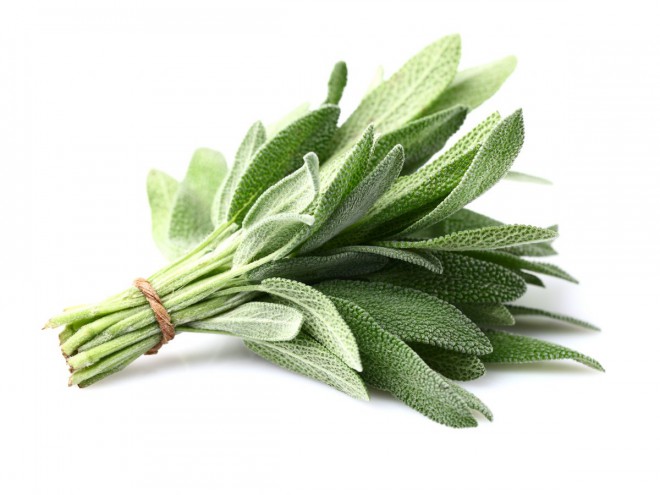 Fresh: at the market in season, and in some grocery stores the rest of the year. Sometimes pineapple sage is found at the market.

Dried: choose the whole leaves rather than ground, and grind them just when you use them. They will preserve their flavor longer.

Refrigerator: a few days in a damp cloth or tissue paper.

Dehydration: put the sheets to dry in a dryer or in a low temperature oven. Store in a cool, dry place away from light.

Memory. In a double-blind, placebo-controlled trial, a sage extract (dye) equivalent to about 1g of sage per day slightly improved the cognitive performance of patients with Alzheimer's disease. This 4-month study was conducted in Iran in 49 subjects with mild to moderate cognitive impairment. The authors also observed that sage could reduce patient agitation.

Four other trials conducted by a team of British researchers involved healthy subjects (120 subjects in total): the results indicate that sage, in the form of a dried plant capsule, leaf extract or essential oil , Can stimulate some aspects of short-term memory when taken before passing a test. It also reduced stress and improved the mood of participants. In these trials, the effects of the plant varied depending on the dosage.

Pharyngitis. In a double-blind, placebo-controlled trial involving 286 patients, sage effectively relieved pain caused by pharyngitis (inflammation of the pharynx and throat) of viral origin. The researchers used an aqueous liquid extract (15%) applied using a vaporizer. In a recent comparative study of 154 subjects with acute pharyngitis, a combination of echinacea and sage was as effective as a conventional treatment (chlorhexidine and lidocaine spray) for pain relief. On the other hand, sage was found to be less effective than a non-steroidal anti-inflammatory drug (benzydamine hydrochloride) to relieve postoperative pain caused by ablation of tonsils or adenoids.

Genital herpes. In a comparative study of 149 subjects, an ointment combining sage and rhubarb extracts was found to be as effective as an acyclovir-based ointment (conventional medicine) for curing lesions caused by cold sores . The ointment containing only a sage extract was a little less effective than the other two products (the healing took an average of one more day).

The German Commission E recognizes the use of sage to relieve functional digestive disorders and excessive sweating (internal pathway) as well as to treat inflammation of the mucous membranes of the nose and throat (external). ESCOP also recognizes specific indications for inflammations of the pharynx, gums and mucous membranes of the mouth. In Germany, the effectiveness of sage infusion is also known to treat inflammations caused by the wearing of dental prostheses and as a supportive treatment for inflammation of the gastrointestinal mucosa.

In the 1930s, a series of studies were conducted to demonstrate the antiperspirant action of sage. A 1989 German survey of 80 people with excessive sweating indicated that a dry aqueous extract (440 mg / day) was as effective as an infusion (4.5 g / day) to reduce sweating. In a study published in 1998 and covering 30 women, Italian researchers concluded that an extract containing sage and alfalfa could relieve hot flashes due to menopause .

The rosmarinic acid contained in the plant would contribute to its anti-inflammatory and neuroprotective action. Its polyphenolic compounds, including derivatives of caffeic acid, would give it an antioxidant action, while the polysaccharides contained in its leaves would have a regulatory effect on the immune system.