For a long time, ginger has been consumed all over the world to relieve various ailments such as rheumatism, nausea, colds and headaches. Ginger can be used in various forms, such as capsules, powder, herbal teas, fresh or in syrup. This chart will focus on the health effects of using fresh or dried ginger (see our Ginger (psn) sheet in the Natural Health Products section for the effects of ginger in other forms). 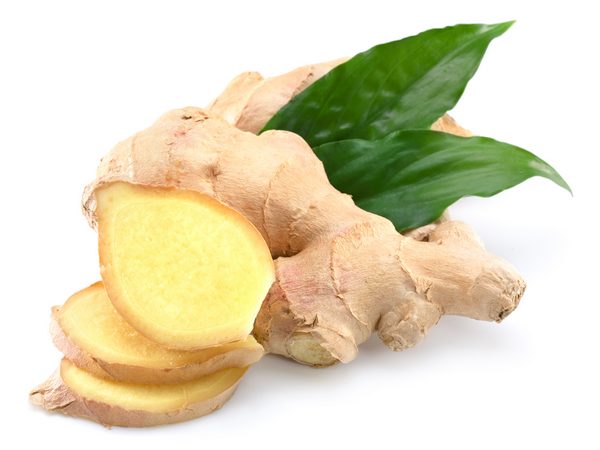 Antioxidants . Antioxidants are compounds that protect the body's cells from damage caused by free radicals. The latter are very reactive molecules that would be involved in the development of cardiovascular diseases, certain cancers and other diseases related to aging. Around forty antioxidant compounds have been found in ginger. Some of them would be heat resistant and could even be released during cooking, which could explain the increased antioxidant activity of cooked ginger. Ground ginger is the third most important antioxidant content in more than 1,000 foods analyzed. It should be noted, however, that this comparison was made on the basis of 100 g of food and not per usual portion (which corresponds to about 2 g in the case of ginger). Fresh ginger also has strong antioxidant activity compared to other vegetables and spices consumed in Asia. Following some thirty analyzes, ginger, as well as turmeric, mint, coriander, broccoli and Brussels sprouts, ranked among the fourteen most heavily antioxidant fresh plants.

Ginger, garlic and onion
By consuming ginger with garlic or onion (or better yet, both) a synergy between their different antioxidant compounds would be created. This would allow them to surpass their individual antioxidant effects.

The main active compounds responsible for the pungent taste of fresh ginger are (6) -sergerol  And (10) -pergerol. Their anti-inflammatory and antioxidant properties are well known and their anti-cancer potential is demonstrated in vitro. A recent study has shown a promising effect of ginger as a therapeutic agent in the treatment of prostate cancer. During the dehydration of ginger, gingerols are converted into compounds called shogaols . This group of compounds is thus found in greater quantity in dried ginger or in powder than in fresh ginger. A study shows that shogaols could protect cells from a compound involved in the development of Alzheimer's disease. The effects of the various antioxidant compounds isolated from ginger were observed in vitro as well as in animals. These are promising results that remain to be demonstrated in humans.

Digestion . A review article, in which animal studies have been documented, shows that ginger (like other spices) could stimulate bile secretion and the activity of different digestive enzymes, resulting in faster digestion Of food. The amounts of ginger used in these studies are high and even higher than would be expected of populations known to be highly consuming spices, such as India. Although consumption of such quantities is realistic for these populations, it is more difficult in a North American context where spices (including ginger) have less place in traditional dishes. Since the effect of fresh ginger consumption on the digestion process has not been well controlled in humans, further research may lead to more precise conclusions on the subject.

Inflammation . The anti-inflammatory properties of some constituents of ginger have been recognized for a long time and are well documented in vitro. Among the known compounds are mainly gingerols , the beneficial effects of which have also been observed in animals, but also the shogaols and the parades which exert their effects by different mechanisms of action. In humans, ginger consumption has shown promising results in reducing pain related to arthritis (only a few studies, using fresh ginger). On the other hand, the results of these studies are difficult to compare, given the different preparations and quantities of ginger used (from 0.5 g to 50 g of ginger per day). More studies are needed before concluding that ginger consumption is actually effective in preventing and treating pain related to chronic inflammatory disorders. 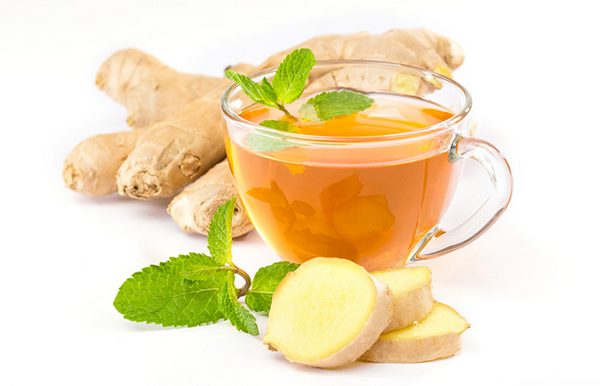 Manganese . Ground ginger is an excellent source of manganese for the woman and a good source for man , their needs in this mineral being different. Manganese acts as a cofactor of several enzymes that facilitate a dozen different metabolic processes. It also helps prevent the damage caused by free radicals .

Copper . Raw ginger is a source of copper. As a constituent of several enzymes, copper is necessary for the formation of hemoglobin and collagen (a protein for tissue structure and repair) in the body. Several enzymes containing copper also contribute to the body's defense against free radicals.

The term "ginger" is derived from Sanskrit shringavera , which means "shaped deer wood". Hence appeared the Greek ziggiberis and the Latin zingiber , then "gingibre" in French, and finally "gingembre", which appears for the first time in 1256 in a written work.

It is believed that the Zingiber home is located in southern India and China, where it has been used as a condiment, food and medicinal plant for over 5,000 years, but its ancestors have never been found wild.

One of the first oriental spices to enter Europe, ginger was brought there by Arab merchants about a century before our era. Two centuries later, the Greek Dioscorides and the Roman Pliny the Elder mention it in their medical writings, emphasizing its carminative properties and its virtues as an antidote against poisons. He was known in France and Germany in the ninth century and in England in the tenth century. During the conquest, the Spaniards settled it in the West Indies and in Mexico, so that from the middle of the sixteenth century Spain was able to import from this part of the globe the precious spice. This was the first time that a spice of oriental origin had been cultivated successfully in the New World.

Nowadays, ginger is grown in all the hot regions of the world. Depending on climatic conditions, soil conditions and cultivation methods, the composition and quality of the rhizomes vary considerably from one country to another, so that a sort of map of the vintages has been established :

Since ginger rhizomes are a readily available food, you can chew or suck a slice of fresh ginger for medicinal purposes (attention, spicy taste!). You can also prepare an infusion with freshly grated ginger. In these cases, take into account that a dose of 1 g to 2 g of dried ginger is equivalent to about 10 g fresh ginger, a rhizome slice (average diameter) of about 6 mm to 7 mm thick.

For the other indications, observe the following dosages

Arab merchants have long been trading in the "white spice" between South Asia and Greece or the Roman Empire, according to the times. The taxes levied on this lucrative trade in ginger represented a large part of the revenues of the Roman Empire.

From the beginning of the sixteenth century, the Spaniards implanted ginger in the Caribbean and cultivated it intensively, especially in Jamaica, in order to feed the European markets. It is the Jamaicans who have invented and popularized the famous ginger beer , which, by the way, has nothing to do with the ginger ale flavored soda sold in North America. Even today, Jamaica is one of the world's leading producers, after India and China. These two countries produce about half of the ginger marketed in the world.

Used for 6,000 years, ginger is one of the panaceas of Asian medicine. Its medicinal uses to facilitate digestion, for the treatment of stomach pain, diarrhea and nausea are as widespread as its culinary uses.

Ginger has also traditionally been used to treat dyspepsia, intestinal gas, colic, spasms and gastric disorders, colds, flu, sore throat, lack of appetite, headaches and rheumatic pains. It has also been used as a stimulant and warming. At all times and in all cultures, aphrodisiac virtues have also been attributed to ginger. Finally, according to Traditional Chinese Medicine , it would prevent infections of the respiratory system when taken when the first symptoms of a cold or flu.

Pregnancy nausea . Ginger can be helpful in relieving pregnant women, according to the authors of a meta-analysis published in 2010. They examined 9 trials involving a total of 1,077 subjects. Note that the Association of American Family Physicians and the American College of Obstetricians and Gynecologists consider ginger as an effective non-drug treatment for pregnancy nausea.

Postoperative nausea. The authors of a meta-analysis published in 2006 concluded that ginger reduces the risk of nausea and vomiting by 35% when the dose is sufficient . They studied five double-blind, placebo-controlled trials (363 subjects in total) in which at least 1 g of dried ginger was administered to patients before they underwent minor surgery (laparoscopy in most Of cases).

Since the publication of this meta-analysis, good results have been obtained in 2 new trials involving 180 subjects. 1 hour before surgery (laparoscopy or major gynecological operation) 1 g or 1.5 g of ginger or placebo 7.8. In another trial, a dose of 0.5 g ginger was tested to increase the efficacy of an antiemetic drug in 120 subjects who underwent thyroid ablation, but the results were inconclusive. .

Anti-inflammatory and pain-relieving effect. Ginger has demonstrated anti-inflammatory properties on animals. In humans, it has proven to be as effective as two conventional medications to reduce menstrual pain in a trial of 150 female students. Participants had taken one of the following treatments during the first 3 days of menstruation: 250 mg of mefenamic acid, 400 mg of ibuprofen or 250 mg of ginger powder 4 times a day.

The consumption of ginger capsules for 11 days was more effective than placebo in reducing inflammatory pain caused by moderate muscle injury in the flexor flexor arm. To learn more about this study, read our new Ginger will reduce muscle pain caused by physical activity . On the other hand, in a trial of moderate-intensity bike participants for 30 min, a dose of 2 g of ginger did not have more effect than a placebo to reduce the perception of Pain and fatigue. According to the researchers, ginger had no effect, because this type of pain was not caused by inflammation.

Travel sickness. Although tradition has established the effectiveness of ginger in preventing or reducing motion sickness, clinical trials have yielded variable results.

Nausea caused by chemotherapy. In this regard, the effectiveness of ginger is not established . In 2 trials (210 subjects in total) receiving chemotherapy, the intake of 1 g or 2 g of dried ginger per day did not increase the efficacy of an antiemetic drug. However, a more recent study, published in 2010, has yielded conclusive results for children and young adults. They took 1 g or 2 g of powdered ginger in 3 divided doses, one hour before chemotherapy, and three hours and eight hours after the onset of chemotherapy.

Another trial also yielded promising results: 0.5 g and 1 g of a standardized extract of ginger (Zindol®) were significantly more effective than placebo in reducing nausea in chemotherapy patients who were also taking a medication Antiemetic. The results of this trial of 644 subjects were presented in May 2009 at the annual meeting of the American Society of Clinical Oncology but were not yet published at the time of this update (May 2011 ).

ESCOP recognizes the medicinal use of ginger rhizome to prevent nausea and vomiting due to motion sickness or secondary surgery . WHO recognizes its use for the prevention of nausea and vomiting in pregnancy . Commission E , in addition to preventing nausea caused by motion sickness , adds treatment of digestive disorders (dyspepsia). The beneficial effect of ginger on digestive disorders may be explained by the fact that it accelerates the emptying of the stomach after a meal 30 .

Different properties attributed to ginger (such as anticoagulant and hypoglycaemic effects) suggest that its consumption may interfere with certain drugs, plants or supplements by increasing their effects. Several authors recommend that people taking blood medications (such as heparin, coumadin or aspirin) or before surgery should avoid consuming large quantities of ginger to reduce the risk of bleeding Excessive.

In addition, large doses of ginger may interfere with heart medications (cardiotonic effect) and medications for diabetes (hypoglycaemic action). These risks of interaction are however theoretical and have not necessarily been observed in patients.

With plants or supplements