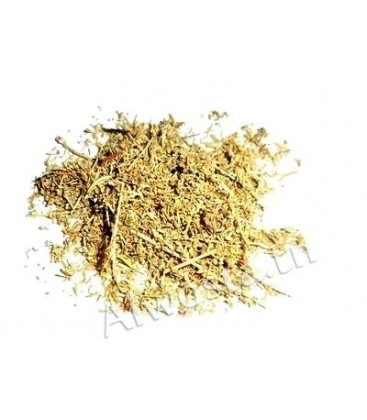 It is left to macerate in cold water overnight and is drunk once a day after meals against worms, coughs, gastric and intestinal disorders, aerophagia, diarrhea, liver and liver problems. Bile, diabetes, hypertension and renal lithiasis.

Oil or alcohol in massage against rheumatism and frostbite.

N.B: Exaggerated use can cause circulatory disturbances.

Promoting rules
Regulates the cycle of menstruation in adolescence and menopause
emmenagogue
antispasmodic
antiepileptic
antihystérique
Urinary tract infections
Spring tonic
stomachic
wormer
vulnerary
febrifuge
In kitchen to soften poultry with flesh too tough
In the kitchen, scent the meats (put a few leaves of wormwood in the belly of the poultry before cooking), but also the sweet or savory cakes
Perfume aperitif wines
The young shoots are mixed with the salad
Used in Japan, China, France and Morocco to make moxas. (A sort of 'fumigation' of certain parts of the body in order to 'draw' the humours).

1-2 tablespoons mugwort, put in cold water and bring to a boil, cook 1-2 minutes and brew for 15 minutes. Soften preferably with honey and drink during the day.

Against the painful rules use the syrups of wormwood in equal proportion with the following plants: alchemille, red vine, marigold, sage, chamomile, pastor's purse. Two tablespoons of this mixture for one liter of cold water to be boiled, cook 1-2 minutes and let infuse 15 minutes. Drink from the three days before the rules and for a period of 5 days.

To facilitate delivery: 3 weeks before the expected date of delivery, decoction with two tablespoons of wormwood - sage mixture in one liter of water. Cook for 2 minutes over low heat and infuse for 15 minutes. Drink a liter every day until delivery.

Against the fatigue of walking in the mountains and preventive of the ampoules, put in the shoe the tops and leaves freshly ceuillies. Renew the operation as soon as too strong a feeling of heat is felt.

Against the fatigue of walking, putting the tops and leaves of the plant in the shoes it would allow to walk without fatigue for hours.

To calm the rules too abundant: equal to with pasteur purse, 1 tablespoon of each plant for 3/4 liters of water, put in cold water and bring to boil, to simmer on low fire 1-2 Minutes, then infuse 15 minutes. Use for the duration of the rules.

The use of artemisia in the inadequacy of menstruation, and in the epileptic syndrome of the girl, generally gives good results.

CURIOSITY: For some practitioners, the actual action of wormwood in hysteria - although it can not be scientifically explained - was known centuries ago. It is curious to compare the terms hysteria and uterus ('antenna' to the world), and Artemisia of Artemis, the Greek divinity who presided over childbirth and helped women.

Too much consumption has the same neurotoxic effects as absinthe. In high doses, it can cause severe poisoning, sometimes fatal (hepato-nephritis accompanied by convulsions).

PROHIBITED during pregnancy, except for the last three weeks, where decoction of mugwort mixed with sage is used to facilitate childbirth.