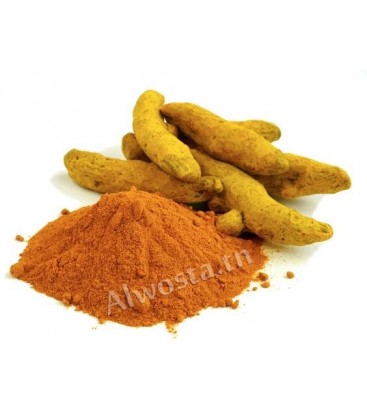 The infusion of 5g / cup is used in enema against purulent ophthalmia and dermatoses.

One drinks the infusion 3 times a day between meals against jaundice and to stimulate the liver. It is a diuretic plant used against urinary disorders.

0.5-1 to 2g (one teaspoon) of ground rhizome powder per day; On foods, salads, vegetables, starches, cereals, fish meats; Can sprinkle on all foods. It has the advantage of coloring them, see them fluorescent (spinach, for example). And it improves the flavor of foods while making them more digestible, assimilable.

In herb tea, to swallow with a little water, to mix with other spices like pepper, ginger, cinnamon, spices with anti-inflammatory and disinfectant virtues ...

Industrial butters are colored with turmeric to give them a more 'farmer' look.

Pepper is a powerful anti-inflammatory, which between turmeric and pepper is the most? The question needs to be asked.

It is advantageous to consume turmeric in the form of mixtures of spices, such as Curry or Colombo, Ras-el-Hanout, Massalé ... or a synergy of spices allows better anti-inflammatory, digestive, anti -putrides, disinfectant.

In the event of overdose or prolonged abuse turmeric may cause the opposite of the desired effects: gastric irritations, diarrhea, abdominal cramps, nausea.

Its therapeutic use is not recommended in case of gastric ulcer, acute cholecystitis (in the form of spices it is tolerated).

People who are on anticoagulant therapy can use a little turmeric in the kitchen. (Curcuma fluidifies blood)

The synergy of the anti-inflammatory and antioxidant effects of turmeric makes it possible to neutralize carcinogenic substances brought by food or resulting from risky behavior (smoking, working in confined or polluted environments)

Turmeric acts effectively on irritable bowel syndrome by significantly stimulating the production and quality of gastric mucus. This will then 'anoint' the intestinal wall and combat the irritations, also favoring the reeducation of intestinal transit. It alleviates the abdominal pain.

It is a very good remedy for the liver crisis. It works by increasing the synthesis of bile by the cells of the liver (hepatocytes). The bile will be able to facilitate the intestinal absorption of fats and fully fulfill its function of solubilizing cholesterol, favoring its fecal elimination in the form of bile salts, it is a cholesterol-lowering effect of turmeric.

Research in India would like to prove that thanks to Curcuma, which is part of the daily food in India, a good part of the Indian population does not suffer from Alzheimer's. I personally think that this study does not take into account our dietary and medical differences: the Indian population is hardly vaccinated, their nutritional tradition does not include dairy products, nor as much sugar, they eat rice and not the Wheat rich in gluten as is our wheat currently in any case until now.

It is a population that mainly feeds on vegetables, tubers, legumes and fruits.

Alzheimer's disease is a neuronal disorder caused by the presence of heavy metals in the brain: vaccinations are heavy metals and other toxic chemical cocktails that are injected directly into our bloodstream, disrupting our DNA, our system Immune system whose toxicity is only partially evacuated and these heavy metals end up stored in our neurons and disrupt them ...).

Turmeric is one of the essential spices in Naturopathy.

The history of turmeric is also written in the future since many scientific research is underway to prevent and treat certain cancers: lungs, breast, prostate, colon and more generally all.

Research shows that the use of curcumin over several months reduces precancerous lesions such as intestinal polyps.

Other studies have shown that, combined with chemotherapy, curcumin can stabilize colorectal cancer or the pancreas at daily doses of 8 g. (Limit this cure in time to avoid the opposite effects).

This substance would finally increase the effects of radiotherapy and chemotherapy, while limiting their side effects. Turmeric is of interest to other medical specialties, such as gastroenterology, rheumatology and neurology; Clinical studies should be conducted in the years to come.

It is advised in Naturopathy to adapt its diet to the needs of our body for the maintenance of good health. (On this site: food advice).

Turmeric in daily use and mixed with pepper or other spices to potentiate it participates in maintaining good health.

Antioxidants are compounds that protect the body's cells from damage caused by free radicals (free radicals are the equivalent of moods that infiltrate our tissues and are favored by an acidified organism).

Free radicals are very reactive molecules that are involved in most diseases.

Curcuma reduces the acidification of our body.