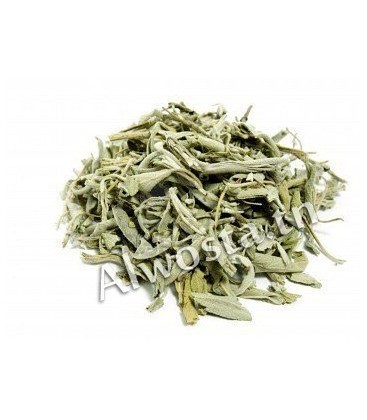 The infusion of 6 leaves per cup is drunk 3 times a day after meals to combat fevers, sweats, rheumatism, paralysis, epilepsy, nervous asthenia, painful digestion, physical and moral depression , Diabetes and especially against the painful and not regular rules. It facilitates conception and delivery.

The decoction in the mouth is used against canker sores, ulcers of the gums and toothache; In lotion against dartres, ulcers and all skin affections.

More details on this product

As a digestive plant par excellence, sage has many medicinal virtues, from the regulation of perspiration to that of menstrual cycles through sore throats, gingivitis and disinfection of wounds. Its use other than culinary requires some precautions because of the strong presence of thujone in its essential oil.

A medicinal herb that has been used since ancient times, the sage is also known by its scientific name, Salvia, from Latin salvare, which means "healing". The Romans, and before them the Egyptians, already knew the medicinal properties of sage; Moreover, the former harvested it during ceremonies and without tools, while the latter used it as a treatment for infertility. Sage is also one of the oldest cultivated plants since it was from the thirteenth century. At that time, there was a popular saying, "Why should a man die while sage grows in his garden?" This aromatic and medicinal plant was then in the composition of multiple preparations. On the orders of Francis I, the sage was used to prepare the water of arquebusade, originally intended to treat the wounds caused by a weapon, the arquebus, before quickly becoming a traditional remedy against many pathologies. The dried leaves were also long smoked to combat asthma. Today, the medicinal properties of sage are recognized by scientific committees, including the European Medicines Agency for the treatment of small digestive problems as well as excessive sweating and local application against inflammations of the mouth, Throat and skin ".

Use and dosage of sage

- In case of sore throat, a sage infusion can be prepared and used in gargles up to five times a day. In this case, 1 to 3 g of dried leaves are to be infused into a cup of boiling water for ten minutes. For internal use, the recommended dose is three cups per day.

- To facilitate digestion, 2 ml of dye should be swallowed with a glass of water twice a day.

The essential oil of sage contains thujone, an abortive and neurotoxic substance. For this reason, its use is not recommended for pregnant women, but also for people suffering from epilepsy.

By respecting the doses, sage does not cause any adverse effects. However, over 15 g per day, it can cause palpitations, hot flushes, convulsions and dizziness.

INTERACTIONS WITH MEDICINAL PLANTS OR SUPPLEMENTS

Due to the amount of vitamin K contained in sage and its anticoagulant action, this plant should be used with caution in people on anticoagulant drug therapy. Sage is also likely to interact with anxiety medications (benzodiazepines), psychic (neuroleptic) disorders and epilepsy.

Rich in thujone, the essence of sage has an action both antiseptic and emmenagogue (it stimulates the blood flow). Its tannins give it toning and astringent properties, while phenolic acids and flavonoids make sage a choleretic and antispasmodic plant. It is also known that it contains substances whose action very closely resembles that of an oestrogenic hormone of the woman, folliculin. Sage is also a remedy known since antiquity for women, whether it is to treat infertility or to regulate the menstrual cycles.

It is important not to exceed recommended dosages.

Scientific research carried out on sage first concerns its hypoglycaemic action. After studies on mice, it has been demonstrated that if the sage extract reduces the level of glucose in the blood, the presence of insulin is required for the plant to actually have a hypoglycemic effect. Still in animals, studies have shown that carnosic acid present in sage is likely to reduce triglycerides, blood lipids predisposing factors to cardiovascular diseases. Sage is also linked to research on Alzheimer's disease. It has been demonstrated that this plant can calm agitation and improve cognitive functions, due to a combined action on transmission of nerve impulses, decreased inflammatory reactions as well as oxidative stress. However, these properties would only be effective at an early stage of the disease.