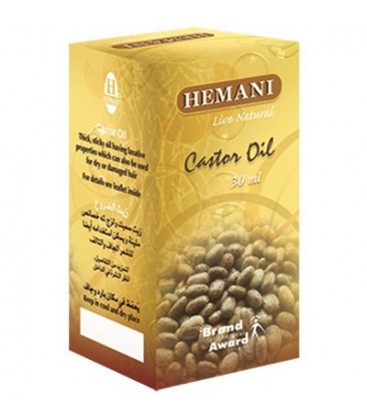 Helps to get rid of hair dandruff and constipation.

Helps against dermatitis, wounds and fungi.

It is a strong analgesic with massage on the back.

Help against the ailments of migraine.

Known since antiquity (Cleopatra already used it as make-up remover) for its many virtues, castor oil is one of the most nourishing vegetable oils. It is extracted from the seed of the castor, a shrub originating in tropical Africa.

Due to its composition, castor oil acts in depth to nourish, strengthen and revitalize the hair, eyelashes, skin and nails.

Alwosta offers Hemani castor oil for 100% natural hair, which can be used, as needed, in massages or in applications.

As it is rich in fatty acids, it also strengthens the eyelashes, the eyebrows and the beard: after a few months, eyelashes, eyebrows and beards will be more supplied and will have gained flexibility and shine.

As for nails, castor oil helps moisturize and soften the cuticles and fortify brittle and fragile nails.

If the hair is dry and devitalized by multiple aggressions, a one to two month routine with Hemani castor oil will revitalize and promote their regrowth. Several times a week, a massage of the scalp with the castor oil will be allowed to penetrate deeply one hour before the shampoo.

For a natural beauty of the hair, Alwosta offers other equally effective vegetable oils, such as onion extract oil, mustard oil or Hemani garlic oil which prevent the fall of Hair and activate their regrowth.

Moreover, castor oil is one of the oils that composes the snake oil Zait Al Hayae that activates hair regrowth.

Benefits of castor oil are many:

- Castor oil relieves the affections of the skin by its softening and healing action, it favors the disappearance of the brown spots on the hands,

Use of Hemani castor oil

- For this, apply the castor oil from the root to the tips of the hair

- Wash your hair with your usual shampoo

- Repeat if possible several times a week. To do for 1 to 2 months

- Or in light massages until penetration into the skin