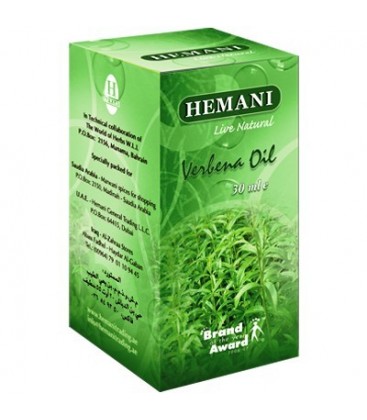 Hemani verbena  oil is a tonic for the respiratory system and digestive system, helps against headache, stomach pain, bloating and intestinal gas, very useful against common diseases of the infant and child health problems

Its name Verbena comes from a Greek word meaning bee leaf, an association all the more fortunate that this plant possesses the same tonic and curative properties as honey and royal jelly. It is also called lemongrass, its leaves crumpled between the fingers exhale a scent reminiscent of lemon and citron.

It is native to southern Europe and is now found all over the world. Its pleasant perfume makes it a plant widely cultivated in the gardens. Medicinal uses include flowers, stem and leaves.

Charlemagne ordered that Verbena be planted in the garden of each monastery. It is the main ingredient of the famous Verbena water "des Carmes" which still exists today.

Verbena was one of the ingredients of "elixirs of youth", and it was thought that she could give back the youth. It was considered as the ultimate remedy in antiquity to calm the disorders of the nervous system. Effective against depression and tension, it is also carminative, ie it helps to eliminate digestive flatulence.

It was also traditionally used as a carminative against gas, insomnia and heart problems.

Verbena is useful in cases of:

Its properties make it effective among other things in depression and tension. The terpenes contained in the volatile essences of Verbena , especially citral and citronellal, are the elements favoring its carminative action and its relaxing effect on the central nervous system. It also has antispasmodic properties. Flavonoids, polyphenols and other compounds also provide favorable action against herpes and regulates the thyroid.

A recent study comparing the effects of a preparation containing Verbena and Valerian with the medicine Halcion shows that of the 99 studies the two groups had better sleep, but problems of 'hangover' and poor coordination Were felt in the Halcion group. The group taking Verbena , valerian did not feel any of its effects. Verbena is therefore an effective relaxant in case of anxiety, mild depression, nervousness and irritability. It reduces emotionality and soothes nervous heart palpitations.

In the form of mother tincture or soluble extract: 30 drops in a glass of water, 3 times a day

In infusion: 2 pinches of dried leaves per cup of boiling water. Leave to infuse for 5 minutes.

There is no toxicity associated with the use of Lemon Balm. Unlike sedative drugs, its use is very safe and does not present any unpleasant or harmful side effects. It is possible to drive a vehicle, even if one consumes this plant, and the alcohol does not seem to increase its sedative action.

Pregnant and nursing mothers should not consume Lemon balm