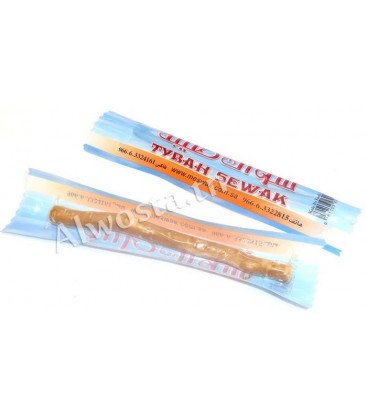 Original Miswak has antibiotic, antifungal, anti-inflammatory and analgesic properties, for the mouth and teeth

The Sewak - Siwak or Miswak is a cinnamon colored stick. It is used for the care of the teeth and for oral hygiene for a long time.

It is known as being in the Middle East and Asia in remote times, it was used to brush and clean teeth due to its high content of antiseptic and calming gums.

The best Sewak, is the one that is made from the tree of the Arak (Salvadora Pérsica) by which our toothpaste was elaborated.

The Prophet Muhammad salla Allahu alayhi wa salam recovered the tradition of oral hygiene as a standard of hygiene for all the Islamic people because independently of its antiseptic agents it also contains other substances that promote digestion.

Even on his deathbed he asked his wife Aisha to prepare him for the Sewak, for the Islamic people are obliged to prepare the body for prayer, the wudu. In this case it was the last prayer of the beloved prophet. This rule became a sunna and almost a liturgical element.

In ancient times the chewing of certain roots was peculiar to civilized peoples because these roots were also used as a toothbrush and became its origin.

- It avoids caries and its extension.

- It strengthens the gums that become stronger.

- It makes the teeth whiter (it removes the yellow color).

- It improves the sense of taste and clarifies the voice.

Components of the Sewak

Siwak or Miswak extracted from the tree of the Arak (Salvadora Persica) which contains about 19 substances which have beneficial virtues for dental health such as natural antiseptics, tannic acid, aromatic essential oil which increases salivation , Trimethylamine, salvadorine alkaloid, vitamin C, inorganic salts such as chloride and fluoride; Minerals: sulfur, phosphorus, calcium and especially silicon; Varying amounts of saponins, flavonoids and steroids.

9 other products in the same category: