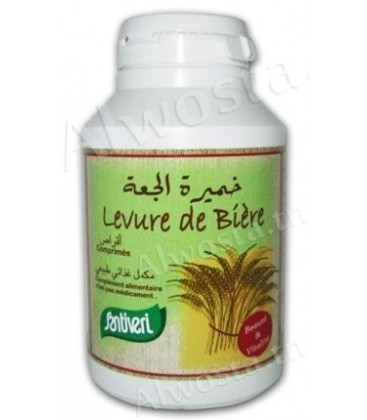 Brewer's yeast Santiveri is a natural food supplement that helps in weight gain, very beneficial for the problems of the skins, hair and nails.

For more information, you can consult the benefits and side effects of brewer's yeast through our scientific article.

Naturally rich in amino acids, proteins, vitamins and minerals, brewer's yeast is intended to provide athletes with all the nutritional intakes they need. Thanks to its formulation, it solves the problems of dietary deficiency caused by a diet, an unbalanced diet or a particular physiological situation (pregnancy, breastfeeding). It is ideal to restore tone and strength after a period of fatigue and overwork. Thanks to its richness in group B vitamins, it also contributes to the radiance of the skin and brings strength and vitality to hair and nails.

Beer yeast is composed of several fungi of microscopic size. It is a true concentrate of B vitamins because it contains vitamins B1, B2, B3, B5, B6, B8 and B9. This high dose of B vitamins allows her to intervene on beauty. Indeed, hair needs it to be brighter and vitamin B also moisturizes the hair, thus avoiding dry hair. The skin also needs B vitamins to regenerate which will remove the risk of skin aging. B vitamins have an impact on nails, strengthen them and fight nail problems such as splitting or spots.

Due to its characteristics, brewer's yeast can be beneficial for the overall functioning of the body. Its consumption avoids cramps, nervous and cardiac disorders. It is also prescribed as a dietary supplement after physical exertion or fatigue. Beer yeast could act on the immune system thanks to the polysaccharides contained in its composition. Among others, trace elements are found in brewer's yeast and it also has a good concentration of proteins. It is highly recommended for pregnant women due to its vitamin B9 content.

How to consume beer yeast

Beer yeast is generally in the form of flakes or tablets. For powdery or flaky yeast, it can be used in raw dishes, as heat could destroy vitamins, such as salads or in yoghurt and make creamy cheeses white. It is possible to follow a cure of brewer's yeast by consuming it every day for two months without exceeding the three teaspoons per day. For tablets, they just swallow with water.

Generally, beer yeast has no side effects as it is a natural product. However, it is necessary to space the cures a few months before resuming if you wish. Beer yeast is available in supermarkets and outlets selling organic products.

Take 3 tablets 3 times a day at mealtime with a large glass of water or 9 tablets daily for continuous supplementation. It is recommended a period of use of 30 to 90 days. The cure can be renewed several in the year

5 other products in the same category: